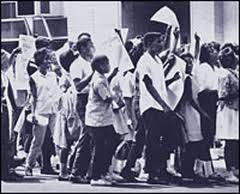 Listening to military and former military talk about their exploits, one often hears some variant of "We were a highly disciplined unit." Listening to current demonstrators we far too seldom here that adjectival modifier. Too often we hear much more about anarchistic, spontaneous decisions and behaviors. This is in no small measure exactly why social movements in the US are weak. They are unpredictable in a negative way and frequently either flee or fight when the going gets tough, something successful social movements do not generally feature.

Looking at successful movements for lessons, we can learn much from the movements of half a century ago, and here is Dr. Martin Luther King, Jr. discussing discipline, training, and even the involvement of children in Birmingham in 1963 in particular. It is an astounding contrast to today. The movement there, according to MLK, featured children as young as seven participating in both the trainings and the demonstrations.

Contrast that with today, when parents are fearful of bringing children to demonstrations and when, instead, they permit the military to take these children to military bases for the Starbase "science education" (a.k.a. brainwashing and military enculturation). We so clearly live in a war culture. We so clearly need to listen to Dr. King and ask ourselves how we, as adults, can work on developing our own vocabulary amongst ourselves and including the children?
Posted by Tom H. Hastings at 8:32 PM