The U.S. still maintains three active nuclear weapons missile launch sites on alert status: one at Minot, North Dakota; one at Great Falls, Montana; and on the Wyoming/Colorado/Nebraska border. The U.S. still has 1,374 ICBM warheads, any one of which can destroy a large city, 2,410 submarine launched ballistic missile warheads, 176 bombs on jet bombers, and 1,100 nuclear armed cruise missiles. And, too, there is the threat of a nuclear war breaking out between India and Pakistan, Iran and Israel, or elsewhere. The nuclear monster has not been slain. It is alive and well and still stalking humankind (Shifferd, 2011, p. 29).

My friends are in prison for desperately trying to reawaken opposition to nuclear weaponry. Susan Crane writes from the women's prison, Federal Correctional Institution, Dublin, in the middle of the Camp Parks military base in California that, "few seem urgent about nuclear disarmament." That is an understatement. 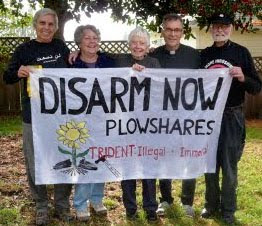 66 years ago the first nuke--Trinity--was blown off in Alamogordo, New Mexico, on 16 July 1945. Scientists were not sure if it would work, if it would fizzle, or if it would ignite the entire atmosphere of our planet, killing everything. But they were the masters of the universe, so they got to roll the dice for all of us. And the military continues to do that to this day, with the most unsoldierly weapons imaginable. There is no way to conduct a nuclear war without massive, known (and thus intentional) civilian annihilation--indeed, the military brass will be the safest ones in the event of a nuclear attack, leaving the rest of us bare backsides to the hurricanes of hell.

These obscenities are the national shame of any country possessing them; of course, only one nation has actually dropped them on cities full of civilians, so arguably one nation's nukes should be feared more than the rest, none of whom have shot or dropped these godawful things at other people. That nation, of course, is the US. It continues to boggle the mind that any sane human could order or participate in dropping these satanic devices on cities, but we did. That raised the national death ceiling, far more existential than the debt ceiling.

References
Shifferd, Kent D. (2011). From war to peace: A guide to the next hundred years. Jefferson, NC: McFarland.
Posted by Tom H. Hastings at 12:11 AM