Being a pacifist between wars is as easy as being a vegetarian between meals.
--Ammon Hennacy 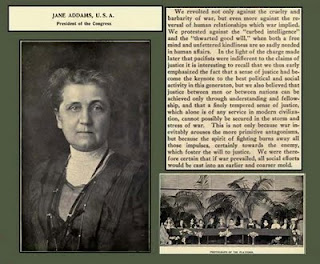 Pacifists are sick of how they are characterized by the reigning pundits and politicos: choosing to do nothing about a threat or a problem, but hoping for protection from those with "the stomach" for violence. We pacifists are always acting, educating, speaking out, getting arrested, having property seized by the IRS, getting fired from positions by employers not so happy about employees engaging in free speech, voting with our dollars, creating structural nonviolence, and getting the finger from rednecks in their trucks as we stand publicly holding signs for peace by the roadside.

As it was and ever shall be... 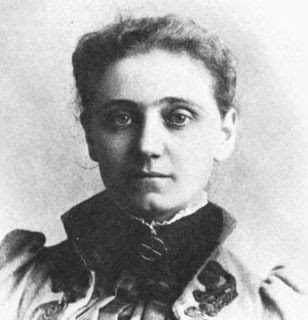 Nobel Peace Laureate Jane Addams opposed the entry of the US into World War I before the 1917 US entry and after. She wrote in numerous places that war cannot possibly be a good way to spread democracy (Fischer, 2010). She was busy daily in her life working for both peace in the crisis sense and in the structural sense, domestically (founded the Women's Peace Party in 1915, which quickly rose to 40,000 members) and transnationally (presiding over the 3,000 participants from many warring countries in the 1915 International Congress of Women at the Hague).

Addams was a quintessential public peace intellectual, writing for many outlets both academic and popular, and posing challenges that politicians are even less able to answer today than they were in hers. Prescient and prolific, she kept the peace ball in play when others were intimidated, holding to her analysis which has only grown more robust in the intervening 90+ years.

Sometimes we need to look back to see forward. Jane Addams is one whose light shines so powerfully it is still out ahead of us.

"Pacifists are sick of how they are characterized by the reigning pundits and politicos: choosing to do nothing about a threat or a problem, but hoping for protection from those with "the stomach" for violence."

There seems to be some confusion out there about the word "pacifist". Apparently, there are people who hear the word as "passivist" and have exactly the notion that you describe above. I have heard people say about pacifists, "I don't think it's right to be passive about threats. We can't just sit back and let some other nation take over our country!" They believe that "passivists" are idealistic dreamers, or worse, cowards who sit back and let others, the pro-violence activists, take responsibility for our safety.

Perhaps we need pacifist spokespersons who can educate the public at a basic third grade level. Let us not assume that people understand the meaning (or spelling!) of the words we use. The right wing pundits know this and exploit the public's ignorance to the fullest.