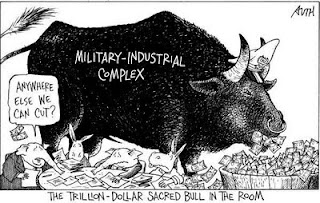 What we find now is an interesting misconception of how war and war preparation has affected our economy. We are told over and over that we aren't asked to sacrifice for this global war on terror, so we aren't really involved. This is grossly misleading.

Our economy is on the rocks--sacrificed--because we spend far more each day than we take in. We have massive unemployment because we insist that any employment must be privately created and then we see the public subsidies to the wealthy being used to decrease, rather than increase, the number of jobs. We have sacrificed millions of jobs by spending on capital intensive military instead of labor intensive infrastructure and social service sectors. Creating a peace economy means creating an infrastructure that produces more jobs and weans us off the oil that is fueling and driving so much conflict.

No, there aren't ration cards. It's not like WWII. Instead, we've postponed that day. Much of it began to manifest in 2008 when the weakness of the economy produced a tidal wave of foreclosures--a major sacrifice indeed--and now, three years on, we've continued to ignore Pentagon spending and we see we are still making it worse. This economic slide into catastrophe continues because the Pentagon consumes and does not produce. Historian William McNeill called the military the first macro parasite and that is why war is not good for "the" economy; it is great for the economy of war profiteers only. Jobs created by war are jobs created by misspending our taxes and taking out unnecessary loans. Americans get that concept; most of us manage to control our credit card spending so that we can handle that debt down to zero every month, or at least every few months. We understand what happens when we only make a minimal payment and continue the same pattern of deficit spending; our debt balloons. We are about to experience the sacrifice of the basic credit rating of our entire country on the altar of militarism, adding yet more sacrifice to our deep sacrifices already made. 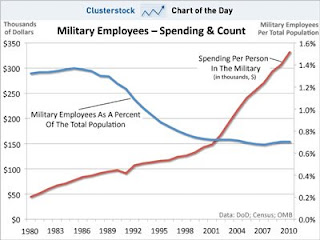 There will be no end to these sacrifices until we stop electing politicians who are afraid to defund the Pentagon. No other country on Earth has a military remotely as huge as ours in terms of weaponry and foreign bases. It's as though these are invisible, demanding endless sacrifice without much evaluation. It is an interesting coincidence that we hear the politicians shrieking that they must cut $4 trillion over the next period in order to help balance the budget, which is almost exactly what the global war on terror is costing, according to a Brown University study. No war, no debt. Problem solved. Oops--too late.

Make no mistake, we are sacrificing heavily. To say that members of the military are the only ones sacrificing in this global war on terror is a lie. Everyone is sacrificing and the unemployed and homeless have already sacrificed much more than most civilians did during World War II, which is always held up as the war that helped all Americans to share in the sacrifice. Time for some honest accounting as our "leaders" press the pedal to the metal and drive us toward fiscal ruin.

Well, the credit card companies are cutting us off, thanks to an unbelievably malfunctioning Congress and an atmosphere of uncivil attack rather than meaningful dialog. Our Congress could postpone the day of reckoning even more or even try to fix it in meaningful annual increments, but they choose to take us flying off the cliff, apparently. We'll see if they are correct in their assumption that they are the ones with parachutes--that question needs to wait for the next election. Politics used to be the art of compromise but in the US politics is really war by other means and we see the mudwrestling results.

References
McNeill, William H. (1984). The pursuit of power. Chicago: The University of Chicago Press.
Posted by Tom H. Hastings at 6:39 AM