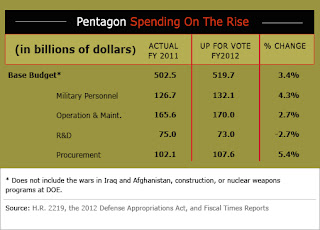 Anyone with the ability to do simple math could have predicted the inevitability of John Boehner's announcement that he was about to fail his Tea Party compatriots and instead just try to save the US from going belly up in the near term. He did so on the basis of two big lies--one by omission and one by commission. 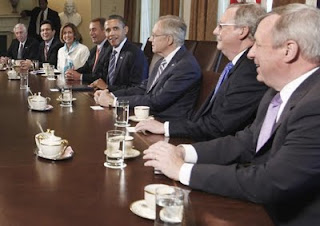 The lie of omission is that neither Obama nor Boehner's Republicans will agree to any remotely significant cut in the massive military profits that have bled the red out of so many Afghans, Iraqis, and US military personnel and bled the green out of the US dollar. It's hard to waste $1.26 trillion without precipitating job loss, foreclosures, and personal/state government/US bankruptcies.

The lie of commission is that Obama has basically been proposing closing loopholes, not hiking taxes. Who takes advantage of loopholes? That would be the elites and corporations, neither of whom pay even remotely close to what might be called a fair share of taxes. The tax codes are radically influenced by highly paid lobbyists who manage to get exemptions for their clients from Richistan that working Americans know nothing about. The grossly overpaid tax lawyers then make sure their clients pay very little, stiffing the diminishing middle class again and again. But Boehner believes--and is sadly correct--that telling this lie enough times with all his Speaker of the House authority will make Americans believe him.

Well, don't. Learn about this and draw the line. When you work hard all year and pay more taxes than many corporations whose profits run to the $billions and whose executives take home increasingly bloated salaries, you know this lie is all that is supporting the unsupportable failure to finally make the obscenely wealthy pay their share. Boehner protects them in the name of the American people and it is the American people who suffer from his lies.
Posted by Tom H. Hastings at 6:14 AM