What is conflict resolution? A Gandhian perspective 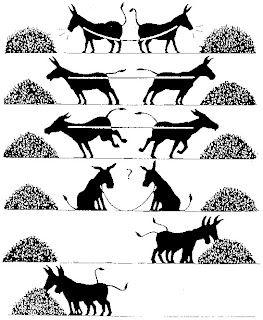 The main aim of conflict resolution is to transform violent conflict into nonviolent forms of political and other kinds of change.
--Oliver Ramsbotham, Tom Woodhouse and Hugh Miall (2011, p. 170).

The core of the field of conflict resolution is the core of Gandhian nonviolence. Gandhi constantly sought conflict, at times seeming to relish a lone stance of defying all who would usurp his sovereignty over his own conscience and reason. His conflicts were not relegated to struggles against foreign occupiers; he was increasingly and most fundamentally in conflict with those he felt were creating a misshapen view of sacred Hindu text and Indian life.

Gandhi proclaimed himself an orthodox Hindu and, like so many Jewish scholars who "argue with God," he interpreted the Gita and all sacred texts in his own way. Joan V. Bondurant (1965) noted that, "Gandhi repeatedly challenged scriptural authority" (p. 121). He did so to bolster his nonviolence and his crusade against Untouchability, proclaiming that, in regard to the latter, he would stand in opposition to all learned Hindu interpretation of the shastras and Smritis if they were read as supporting Untouchability.

Indeed, that struggle ultimately cost him his life, a price he was prepared to pay, and did. He was not shot by the British oppressor, nor by a Muslim fanatic, but by a fellow Hindu who reminds me of so many of today's ultraleft critics of nonviolence, someone so arrogant that he and his cohort believed they could end a dispute with an act of violence. Gandhi died for the principles of conflict resolution, for what he called satyagraha, or truthforce. His assassin achieved nothing but ignominy and disgrace, earning the loathing of much of the world. There were millions at Gandhi's funeral or in active open mourning around the world. Scant few attended the funeral of his murderer. These final measures of respect and admiration continue as we strive today to learn much from the life and thinking of Mohandas Gandhi and the thinking of those who killed him lie buried in the dust of historical contextual footnotes.

For humankind, Gandhi achieved in life and in death the next great step for our evolutionary journey, the transformation of conflict from violent to nonviolent. He did not shirk nor shrink from conflict--that is for those who acquiesce to oppression of themselves and others. He simply showed and lived a vastly superior way to wage it. That is our mission in the field of conflict resolution and our endless challenge.