Earth to Congress: Wake up and smell the savings

Congress. Geez. I hope they don't actually wonder why Americans respect them so little. And we are Equal Opportunity Disdainers. Each party sucks badly. Obama, for all his goof-ups and sliding numbers, is way ahead of Congress in the opinion of Americans, though you would never think that listening to the Republicans who are constantly telling us what "the American people want." Most of all, Republicans, when it comes to job creation and general job approval, we don't want all y'all. But then, Republicans have never let the truth stand in the way of a good sound bite.

Democrats can't manage to control their libidos (Weiner and Wu, coming to group therapy session near you), but the Republicans cannot seem to control their penchant for declaring identity groups and starting fights--they attack Muslims, immigrants of all sorts, anyone getting any government help--and they seem determined to devolve to the ultimate Milton Friedman-David Koch ethos of "zero regulation on corporations" plus the notion that the military is the only legitimate government expense.

Well, to both of you--Dysfunctional Democrats and Rabid Republicans alike--the peace movement has been shouting from any available rooftops for decades that the military budgets are ruining America. This is what has happened and we see you are still unable to get that.

You cannot seem to engage in Negotiation 101 for the good of the American people, so let's just refresh our memories. What was it that the peace movement has been saying? 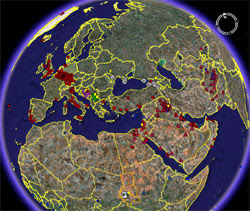 If you did even half these Ten Recommendations (we'll leave Ten Commandments to someone else) you could have a pizza together and wrap up a deal. If you did all Ten Recommendations this year, I would pledge to sign over 100 percent of my future Social Security checks to a nonviolent substitute Civilian-Based-Defense government agency. Happily. How is that for a win-win? Oh, that's right. Republicans won't stand for a win-win. They will take unconditional surrender, though they would prefer something more like extirpation of all members of Congress who might not want to cut off Social Security and Medicare rather than cut the Pentagon.

Sigh. I guess I can look forward to opening that first Social Security check in a few years. I'm sure it will be a scrap of paper with a hand-scrawled note, "IOU. Love, the Pentagon."
Posted by Tom H. Hastings at 7:27 PM